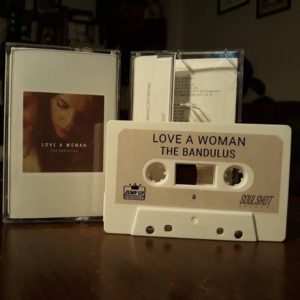 THE BANDULUS are the brainchild of Jeremy Peña, formerly of LOS SKARNALES and THE TRENCHTOWN TEXANS.  After the 2006 break-up of Los Skarnales and leaving Trenchtown Texans in 2010, Jeremy decided to venture out on his own and create the traditional ska, reggae, and soul sensation that is THE BANDULUS. Their first full length album, SKA.REGGAE.SOUL was released in 2010 and got the world talking – then in 2012 the band released their second full length “The Times We Had”, which was featured on countless ska/reggae top 10 lists that year.  The Bandulus have already shared the stage with yesterdays and todays top ska and reggae acts including the originators of ska The Skatalites, The Slackers, Easy Star All Stars, The Aggrolites, and even Grammy award winners Los Lonely Boys.  The Bandulus are finally back with their long-awaited third album  “Love A Woman” – which we first released in October for Cassette Store Day!  A unique album with a heavy soul influence and heartfelt lyrics, its stays genuine to 60’s style traditional ska while crossing / mixing genres –  but one thing is for sure, it keeps one on your toes! Jamaican patois for bandit, The Bandulus will steal your heart and always leave you smiling! The Bandulus will be joining Void Union this year at Freedom Sounds festival in Germany!  We are so happy to stock this great new album on vinyl direct from the band! Pick up the cassette ape at the same time in our exclusive collectors bundle!