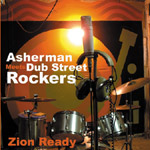 Two shots of mighty from Los Angeles’ crucial roots reggae band! With a name like Dub Street Rockers, many people would mistake these albums as modern dub records – full of echo-laden spacey hi-tek sounds that appeal to rave kids more than reggae fans. Not HERE! This band creates dubwize

instrumental reggaeplayed with authenticity and an affinity for capturing the vibes of reggae’s earlier days. We’re talking the heart of original reggae and dub – legendary artists like JACKIE MITTOO, The UPSETTERS, TRINITY, HARRY J ALL STARS, and labels like TROJAN, PAMA, TREASURE ISLE and STUDIO ONE. Both these albums sound like they were recorded in the late 60’s / early 70’s due to the genius of LA producer/artist J Bonner. It’s all here – lazy rocksteady beats comprised of crisp drums, wah-wah textured guitar, clavinet, subtle percussion, ominous organ riffs, scratchy guitar, one-drop drums, bongos, bits of patois mutterings and faded-out horn parts. THIS IS THE BIG BOSS SOUND – upgrade your speakers before turning up your system on these albums! For the fans of instrumental reggae – we bring you “SOUL WINNER” , and for those who enjoy a truly original Jamaican rockers DJ chatting away, we bring you “ZION READY” which features the mysterious ASHERMAN. Skinhead reggae, dub, roots, rockers, rocksteady, whatever – this is DUB STREET ROCKERS.