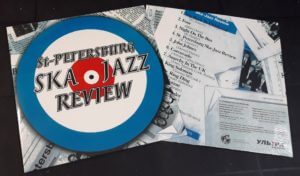 Magnetic Loft Records in Russia have been on a serious tear releasing vinyl from the best bands in the Russian ska scene! The latest is the new MIDDLE VOLGA SOCIAL CLUB “LOVE YOU SO” LP – a wonderfully soulful and funky ska/reggae act with a female lead singer, a wonderful follow up to their album of a couple years ago. This album keeps your interest from start to finish, it’s is refreshng to hear a band take some chances with the Jamaican form. Magnetic Loft has also reissued the incredible 2001 debut album from Moscow ska-jazz  pioneers ST-PETERSBURG SKA JAZZ REVIEW, thirteen classics for fans of New York Ska Jazz Ensemble, Eastern Standard Time, and Western Standard Time! Swingy jazz jams, mostly instrumental, includes fun versions of “John Jones”, “Anarchy In The UK”, “Dr Ring Ding” and many more! This album was one of our best CD sellers nearly 2 decades ago – so glad it’s now back…and now on vinyl! Not to be outdone is the debut vinyl album from top Russian traditional ska band LOLLIPOP LORRY! From their earliest shows, Lollypop Lorry have gained a reputation of being one of the most promising ska/reggae bands in Russia, if not the world! Their repertoire is based on their own original songs and tunes as well as the traditional Caribbean music standards — ska, reggae, dub, calypso. During the last ten years the band performed at the largest Russian festivals, visited many Russian cities, played with The Wailers, BeNuts, Markscheider Kunst, St. Petersburg Ska-Jazz Review and many others. Lollypop Lorry have fans all around the world, lead by powerful yet soulful female lead vocals, and their music can be heard on many international compilations and podcasts. Visually, the band dress sharp and excite a crowd – they are also the only ska/reggae band in Russia whose videos have more than 4 million viewers from different countries. Inspired by American jazz and The Skatalites,  the band can also drop roots reggae grooves for cool late night sessions. This debut vinyl album is a MUST HAVE for every TRUE Jamaican music fan! Period.