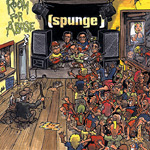 What band has graced the pages of international rock magazine KERRANG! over twelve times in the past two years? You¹re probably thinking along the lines of Bon Jovi, Limp Biscuit, Korn, or Metallica, right? Well, make sure you add [SPUNGE], a critically acclaimed UK five piece that¹s selling out tours across Europe with their unique stew of melodic punk rock and ska. In the tradition of American punk bands like Green Day, Blink 182, Less Than Jake, and NOFX, [SPUNGE]’s success is entirely based on

their hi-energy live rock show: frantic pogo-friendly light-hearted pop songs that mix British 2-Tone riddims with American punk rock. In one word: infectious! Their debut album “Pedigree Chump” was released on Moon Europe in March 1999 and sold well on import through US specialty shops— their notorious live shows earned them an internet buzz and a wicked cult status in the United States. Before the band knew it, 3000 copies had sold worldwide with limited distribution. This past February, [SPUNGE] jumped back into the studio to record a new single entitled “Ego”, which was distributed in the US and Japan on a limited basis to promote this debut US release. “Room For Abuse” features seventeen songs that were engineered and mixed at the legendary DEP Studios by Dan Sprigg (UB40, Cradle of Filth, Bentley Rhythm Ace), delivering pop punk anthems, dub punk reggae, and fast-paced ska-punk…..all with a light, tongue-in-cheek writing style that could have only come from the land of Monty Python. Spawned in America, ska-punk has taken on monumental proportions world-wide, and [SPUNGE} is right at the top and ready to take over America with their Spring 2001 tour!