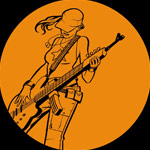 Brooklyn’s DUB IS A WEAPON has been on the fast track over the past few years, recently becoming LEE SCRATCH PERRY’s permanent backing band. These two superpowers clashed throughout 2006 with a sold out tour of the West Coast and Canada, and were the talk of the town at this year’s SXSW. Although many fine musicians have performed within the ranks of DUB IS A WEAPON, two men have been the catalysts since day one: DAVE HAHN, a man who has traveled the world as a guitarist with END_OF_DOCUMENT_TOKEN_TO_BE_REPLACED