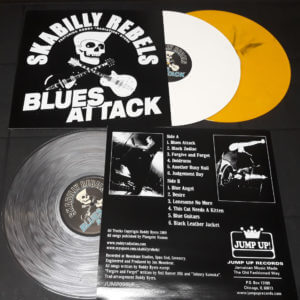 LAST COPIES! SILVER NOW SOLD OUT , sorry. Less than 10 each! Hand SCREEN PRINTED SLEEVES! Far too often when a band claims to combine two dissimilar styles of music into an all powerful “new” hybrid, fans get a wee bit skeptical. After all, in most cases these creative endeavors fail miserably – and quite often it involves ska music. Simply put, this stereotype does not apply to the SKABILLY REBELS. RODDY RADIATION’s band successfully takes the best parts of rockabilly, minus the cheesiness that all too often is associated with the genre, and then puts it to a laid back traditional ska beat. Should we expect anything less? Of course you already know him as the legendary guitarist of The Specials (who also wrote their classics ‘Rat Race’, ‘Concrete Jungle’ & ‘Hey Little Rich Girl’), who also later formed blues influenced acts The Bonediggers and The Tearjerkers. He’s a veteran and true innovator of both the 2-TONE ska movement and the English rockabilly revival scene. Roddy’s  voice is smooth and melodic, yet with pub grit. The fact that his guitar playing is superb goes without saying, but his ability to seamlessly combine both ska and rockabilly without losing the integrity of either genre is downright amazing.  Roddy Radiation has proven again that he is a truly innovative musician and may be in the process of once again reinventing the face of ska music. Guess this album forces rude boy mods and skins to mix with rockers and teddy boys. What can’t we all just get along? END_OF_DOCUMENT_TOKEN_TO_BE_REPLACED 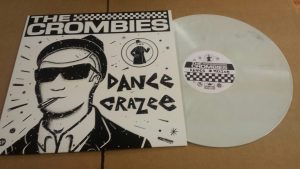 If you don’t dance to THE CROMBIES, you don’t dance! Chicago’s 2-TONE champs have finally gone and done it – recorded their debut album for JUMP UP RECORDS! Formed in 2010 by ex-members of DEAL’S GONE BAD and LORD MIKE’S DIRTY CALYPSONIANS with a very simple idea – start out as a 2-TONE cover band playing the hits of THE SPECIALS, BAD MANNERS, BEAT, MADNESS, etc – the later create 2-TONE versions of songs that have that ska potential! Original DGB singer “Lord” Mike Park once again was on the case and recruited a top notch troop that included ex-DGB keyboard player Karl Gustafson, DGB guitarist Dave Simon, Vee Sonnets on lead guitar, Jason Berry on bass, and Matt Meuzelaar on drums. The band’s first 2-TONE’d studio cut was NINEY THE OBSERVER’s “BLOOD & FIRE” released on a limited edition 7″ single, with a new version of the classic DGB song “MAD AT THE WORLD” on the flip. It was an instant hit, the single got dancefloors moving all across the world! END_OF_DOCUMENT_TOKEN_TO_BE_REPLACED