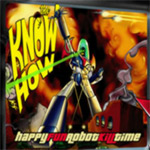 What band was named as one of the country’s top up-and-coming ska acts in ALTERNATIVE PRESS and recently wowed over 10,000+ fans at SKA SUMMITT 2003 in Las Vegas? It’s The KNOW HOW!

The Know How is a 7-piece rock/ska band hailing from Gainesville, Florida, formed in 1998 by lead vocalist Skyler Stone and keyboard player, Alex Lee. The Know How began building up a sizeable fan base early on by playing local shows and doing small tours around Florida. Within two years, the tours have grown larger and spanned across the United States. Recently The Know How completed a 2 month U.S. tour taking them throughout the West Coast, to SKA SUMMIT in Las Vegas, and returning them back to Florida to play the Van’s Warped Tour for their 3rd straight year.

The Know How have also landed opening slots on non-festival tours by some of the best known punk/ska bands such as The Mighty Mighty Bosstones, Reel Big Fish, Mad Caddies, The Ataris, MU330, The Pilfers, Against All Authority, Flogging Molly, The Toasters, and many more. The Know How has toured nationally with Mustard Plug, Allister, and Whippersnapper ­ and throughout Canada with The Planet Smashers. The Know How’s new album “HAPPY ROBOT KILL TIME” combines ska, rock and punk with with tight bass lines, Moog keyboards, and plenty of personality that gives it a sound that’s uniquely its own. The Know How delivers fun with poppy tunes like the Karate Kid-inspired “Daniel Larusso is Going to Fight!”; mock metal with “In the Key of Metal” and horn-tinged, ska punk anthems like “I am Spartacus”. These catchy songs were further fueled by the internet and MP3.com, where The Know How had the #1 most downloaded ska song in the state of Florida and have held the position of #7 most downloaded ska song in the nation in 2003.

Gainesville is already known for spawning national punk/ska favorites like as Less Than Jake and Hot Water Music, so it should be no surprise that “HAPPY ROBOT KILL TIME” was produced and Engineered by Less Than Jake’s Derron Nuhfer & Grammy winning engineer Ronny Cates (Less Than Jake “Hello Rockview,” Hot Water Music “No Division”). The high energy, power-packed Know How will soon be solidifying Gainesville’s reputation as a superb music scene as they tour across the country once again to bring you songs from this new album!