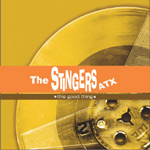 Since 1998, The Stingers ATX have steadily developed their own modern hybrid of Jamaican reggae-rocksteady and classic American soul, from their weekly three-hour showcases at the Black Cat Lounge in Austin, Texas to New Year¹s Eve in Paris. While their live shows keep crowds on their feet with solid roots-reggae rhythms, melodic horn lines, and tight 3- and 4-part vocal harmonies, their songwriting sensibility draws from the styles of Bob Marley and the Wailers, Gregory Isaacs, Sam Cooke, and the Drifters. This six-piece lineup, which features established musicians from Austin’s famed music scene, maintain an active tour schedule from Texas to New York City’s Knitting Factory to Europe.

The Stingers ATX have been consistently building their home base in Austin, where they can be seen regularly at some of the city’s top venues, as well as on regional TV and radio productions. They have seen steady sales of their first two recordings, The Stingers (2000), and Big in Mississippi EP (2001), were featured on this year’s STILL STANDING 4xCD BOX set (5000+ units), and were singles out in Alternative Press as one of today’s best new ska groups to watch out for. All this plus a growing number of fans keep the Stingers ATX on college radio charts throughout the United States. In the past four years, the group has shared the stage with reggae and ska legends such as Neville Staples (The Specials) and leading contemporaries such as The Slackers and The Toasters. They were also part of the Bob Marley Festival Tour, which featured the band throughout the southern U.S. for two years. Over in Europe, The Stingers ATX have become virtual superstars with constant tours of Germany, France, Spain, Switzerland, and the Netherlands ­ all booked by their European label Grover Records.

This special U.S. version of their newest album “This Good Thing” sees further collaborations with NYC studio veteran Victor Rice, who utilized his extensive knowledge if reggae/rocksteady traditions to highlight the group’s stunning Jamaican/American hybrid. This release also includes 3 new ska scorchers not available on the original European version plus 4 special Victor Rice dubs straight out of his studios in Brazil.

For Fans of: The Slackers, Toasters, Skatalites, Hepcat, Deal’s Gone Bad, The Zvooks