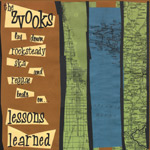 The ZVOOKS, formerly known as COREY DIXON & THE ZVOOKS, are an exciting “new” 5 piece soul ska/rocksteady group that calls Chicago it’s home. The reason why we say “new” is because THE ZVOOKS have been taking Europe by storm since the release of their first album “Calm Down” (Mad Butcher, ermany) in the

summer of 2000. That collection of tunes were recorded in NYC under the supervision of VIC RUGGIERO (The SLACKERS lead vocalist) with some help from Mike Refhus and Derek Phelps of The ARTICLES. Less than 2 years later, The ZVOOKS were back with their second album “Come & Go” which captured the group in a transitional period, moving toward a more mature, soulful, laid-back sound. Featuring a smaller and tighter group, The ZVOOKS venture into the realms of rocksteady and reggae, but still lay down the ska groove as ordered. With two records and countless European tours under their belt, it was time for THE ZVOOKS to make a move in the United States. Since both import albums sold extremely well in American indie shops and through JUMP UP’s website, it made sense for JUMP UP to ink a deal with the European label for a domestic release in 2003. This 3rd album entitled “LESSONS LEARNED” is a true gem – more soulful rock steady and scorching 60’s ska that gets the dancefloor moving. Comparisons to rock-steady groups THE MELODIANS, and THE PIONEERS come to mind, while the ska tunes are similar to vintage BYRON LEE & THE DRAGONEERS or – of course – the almighty SKATALITES! THE ZVOOKS truly have learned some lessions – in a few short years they have turned into one of America’s brightest new traditional ska acts after conquering Europe first! These 13 tracks are sure to become an instant U.S. ska classic.