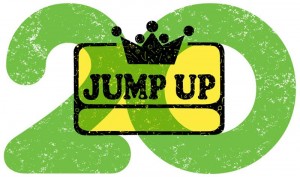 Founded by DJ Chuck Wren in 1993, JUMP UP is a Chicago based independent record label and mail order distribution company specializing in modern bands who play original Jamaican ska, reggae, rock steady, and calypso. With over 200 releases under our belt, we proudly stand by our motto “Jamaican Music Made The Old Fashioned Way”. Not only do you get boss vintage sounds that sound like they came from independence era Jamaica, but we make them in its original art form: vinyl records. We feel strongly about releasing music in physical form, which is why we choose not to deal with the digital side of the music industry. What makes JUMP UP different than many other labels is the simple fact that we are passionate collectors of vinyl records ourselves – we know what true music fans want. It is our goal to support our music through its heart – the real fans who collect the music. We’re the home of ROGER RIVAS, CRAZY BALDHEAD, DEAL’S GONE BAD, EASTERN STANDARD TIME, GREEN ROOM ROCKERS, THE BULLETS, REVIVERS, WARIEKA HILL, SOUL STEPPERS, PRESSURE COOKER, THE DRASTICS,  SOUL RADICS, BROOKLYN ATTRACTORS, REGGAY LORDS, THE PRIZEFIGHTERS, GO JIMMY GO, HEAVY MANNERS, SKAPONE, THE CROMBIES, and many more – plus we release music from a growing number of international acts including  KINGSTON RUDIESKA (South Korea), LEO & THE LINEUP (Denmark), KING PEPE & HIS CALYPSO COMBO (France), COUNT KUTU & THE BALMERS (Philippines) , MEOW MEOWS (UK), MOON INVADERS / CAROLOREGIANS (Belgium), MR T BONE (Italy), BABYLOVE & THE VAN DANGOS (Denmark), TOMMY TORNADO (Holland), DR RING DING (Germany) and KING HAMMOND (UK).  JUMP UP is also a place where many Jamaican legends continue to release new music, including CHARLEY ORGANAIRE, MONTY “Neysmith” MONTGOMERY of SYMARIP, WINSTON FRANCIS, SUSAN CADOGAN,  ROY “MR SYMARIP” ELLIS and a soon to be released single with DERRICK MORGAN & DENNIS ALCAPONE.

SHIPPING IN THE USA is FREE with media mail. Please keep in mind that this can take a few weeks to arrive. Everything is packed with 30 years of experience and professional techniques, but nothing can protect a package from extreme mishandling. Please be aware we DO NOT issue refunds or replacements for damage due to extreme weather conditions, minor cosmetic damage, such as corner dings, bends, split inserts, and so on.

Whoever wants to send us music may do so, but please keep in mind the following before posting anything to us:

– Jump Up Records is a small independent label that works on a limited number of releases.

-Please do not expect a reply from Jump Up. Due to lack of time we will only get in touch with those bands we might be interested in working with.

– If the genre you play is not Jamaican style ska, reggae, rock steady, dub or calypso please do not send us demos.

– Please do not send us MP3s via email

– Sorry, we can not return items posted to us.

The Early Roots of Jump Up Records:

When JUMP UP RECORDS began in 1993 it released Midwestern Ska exclusively. Do you remember the American Skathic compilation series? Our compilations introduced the world to dozens of great bands like Mustard Plug, The Suicide Machines, Hot Stove Jimmy, The Parka Kings, Slapstick, The Eclectics, and many many more. We released Midwest bands because we believed in them. We also believed in the strong Midwest scene built around my radio show here in Chicago (WNUR-FM 89.3 from 1988-1996). Then the mid-90’s hit, and suddenly everybody started a ska band, and it seems like everybody started a ska “label” too. The music REALLY suffered; it was all just bandwagon-jumping bands, who all sounded like Reel Big Fish or some other ska-punk band. It got really bad, and the true ska music fans turned away due to the over-commercialization of the scene. It wasn’t a scene anymore – just lots of Warped Tour wannabes putting out bad records. Great labels like MOON SKA crumbled. JUMP UP dug it’s heels in for the long haul, and from the year 2000-2003 we were the only American ska label that continued to release new traditional ska music. We launched the STILL STANDING 4xCD BOX set and the ska world seemed to pick up again. Don’t buy ska music from some internet punk site – they only sell the watered down junk. Stick with JUMP UP! Records, we won’t steer you wrong! We’re celebrating our 22st anniversary in 2015, and we’ll be here for years to come! …. Chuck Wren