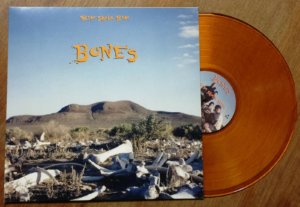 ORANGE VINYL SOLD OUT SORRY!  Black vinyl remains. Legendary 1991 alt rock/ska album on vinyl for the first time, adding 3 bonus tracks from the original sessions. Boston’s Bim Skala Bim are one of a handful of veteran ska bands that have kept ska in America alive through the decades, and for this set the group collaborated with Lou Giordano and other rock producers. The lyrics were more focused than on previous efforts, highlighting the group’s political engagement and familiarity with contemporary futuristic literature. Taking their cues from the jazz oriented Skatalites rather than British 2-Tone, this early release by the group’s five core members shows why they were one of the best. Dan Vitale’s compelling lead vocals and Jim Arhelger’s drums are firmly rooted in the rock arena, but they meet the band’s swelling horns and jazzy ska arrangements for a smooth, upbeat sound that’s paced at just the right tempo to demand dancing. For many of the band’s most devoted fans, “Bones” was the quintessential summer album, tunes like “Wandering Soul”, “In Our Midst”, “People In The World” and “At Wo’s” became the beach party soundtrack for college towns all across the Eastern seaboard.  Limited edition of 500.