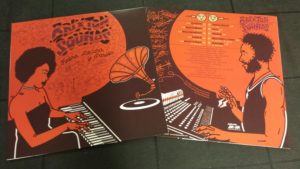 Mexico’s BRIXTON SOUNDS started in 2003, early on focusing on covers of foundation ska & reggae. Their first production “LOSING THE TIME” was recorded in 2005 and helped grow the band’s fanbase across the Mexican republic, their second recording “PISTOLEROS” from 2009 quickly brought them international acclaim. BRIXTON SOUNDS have performed with international bands such as The Aggrolites and Chris Murray, and have participated in several major music festivals in Mexico City. In 2012 long running California label STEADY BEAT released the band’s debut vinyl 7″ record – fast forward to 2017 and we here at JUMP UP get offered to release their brilliant debut vinyl full length LP. On this full length jazz is king, you get summery female fronted vocal ska, boogaloo soul influenced instrumental groovers, hot organ driven jazz roots and early/skinhead reggae. What we liked about the record (and why we out it out!) is the nice mix between male and female vocals, and it’s overall nod to Blue Note jazz with respect to vibe an instrumentation. It may sound cheesy, but this record at times delivers an Astrud Gilbeto / Stan Getz type of warm vibe, but (obviously) influenced by Mexican/Jamaican traditions and not Brazilian Bossa Nova. Definitely recommended for fans of BROOKLYN ATTRACTORS, NEW YORK SKA JAZZ ENSEMBLE and the almighty SKATALITES band! Varied color vinyl that matches the gorgeous sleeve art – prepare to be surprised! Limited to 350 copies.