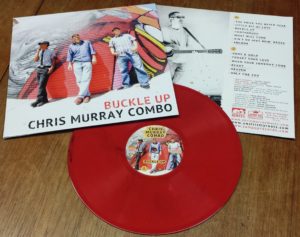 Chris Murray is a unique figure on today’s music scene, a Canadian born singer-songwriter and guitarist who works primarily in ska & reggae music. As leader of Toronto-based rock-pop-ska powerhouse King Apparatus, Chris developed the reputation as a dynamic frontman and one of the genre’s finest songwriters. Over the group’s eight year tenure, King Apparatus released two-full length albums, shot eight videos and toured coast to coast non-stop, sharing stages with virtually every top act including the Mighty Mighty Bosstones, and The Skatalites. Upon the band’s breakup, Murray relocated to Los Angeles and emerged as a solo artist, releasing his debut solo album “4 Track Adventures of Venice Shoreline Chris” on legendary imprint Moon Ska NYC. Murray has pioneered a low-fi, intimate singer/songwriter approach to modern ska music. His co-writing and producing credits in various capacities appear on work from the Planet Smashers, the Slackers, Stubborn All-Stars and the Specials’ Neville Staple. Chris Murray tours non-stop, both solo as well as with the Chris Murray Combo, performing throughout North America, Europe, Japan, Korea, and South America. From jamming with The Specials in a basement club, to recording an album with The Slackers, and trading songs on an acoustic guitar with 72-year-old boogie-ska pioneer Laurel Aitken, life has led Chris Murray down a path to the very roots of ska and reggae music. The Chris Murray Combo’s first album “Why So Rude” was released way back in 2008 – we would have to say it was one of our faves of that time. Like his earlier solo records on Moon NYC and Asian Man, it was stripped down and raw, super authentic traditional 60s ska just within honrs. “BUCKLE UP” picks up where “WHY SO RUDE” left off…with the usual top-shelf songwriting backed by a simple and organic drum/bass/acoustic guitar reggae & ska vibe. Songs like “Anchor” and “Forget Your Love” are perfect summer jams while tracks such as “Little Bit Of Love” and “Ain’t No Joke Bein’ Broke” will have you looking for some room in your house to dance! We’ve loved CHRIS MURRAY’S music since the late 80s (side note KING APPARATUS crashed in my college apartment in 1991), we are SO PROUD to be the first to get some full-length vinyl out for him! Last copies on BLACK VINYL.