CASSETTE STORE DAY 2019 EXCLUSIVE RELEASES – Buy MORE and SAVE see below for our great deals! After making purchase send list of tapes wanted to jumpuprecords@gmail.com

Andy Bassford/THE HARDER THEY STRUM   TAPE    JUMPTAPE018
The reggae legend you’ve never heard of. Discovered by Horace Andy in the 70’s, played with Dennis Brown, Toots & The Maytals, Roots Radics, and We The People. Currently plays with Monty Alexander’s Harlem Kingston Express and won a Grammy in 2019 for Sting & Shaggy’s 44/876 album. Andy’s first ever solo album is a song by song remake of the world’s most famous reggae soundtrack starring Jimmy Cliff. Gold shell limited to 75 copies. (JUMP UP)

The Bandulus/LOVE A WOMAN   TAPE  JUMP021TAPE
Brand new album from ska reggae soul champs originally from Austin, TX now based in Portland, OR. A must for fans of Daptone and Trojan Records! Limited to 50 copies. (JUMP UP / SOUL SHOT)

The Slackers/THE RADIO – “LIVE” ON WSKI   TAPE   SPTAPE006
New York ska / reggae legends’ 2012 covers album on tape for the first time. Eleven tracks, some famous, some obscure, all beautiful and perfect. It’s like a radio station where all the songs were The Slackers. Songs from The Misfits, Madonna, The Sonics, Elton John, Rolling Stones and more. Gold shell, comes with a bonus retro WSLK-FM bumper sticker. Limited to 100 copies. (JUMP UP / SPECIAL POTATO)

Loving Paupers/LIBES + DUBS   TAPE   JUMP147TAPE
Washington DC lovers rock reggae band formed by current and ex-members of The Pietasters. Extended play 80 minute cassette featuring the entire Victor Rice dub version of the album on side B. For fans of Hollie Cook, The Skints, and The Frightnrs. Red clear shells. Limited to 75 copies. (JUMP UP)

Various Artists/WE DO THE SKA!  TAPE   WEDOTHESKA
Brand new 80 minute 22 band label sampler mixtape with the best ska, reggae, 2 Tone, and mento from around the world! Housed in a bonus foam drink coozie designed by Chema Skandal.  Limited to 100 copies. (JUMP UP)

If you’re near Chicago join us at Bucket O’ Blood Records for the city’s best celebration! DJ Chuck Wren will change to “TJ” and select from you exclusively from his tape collection!! 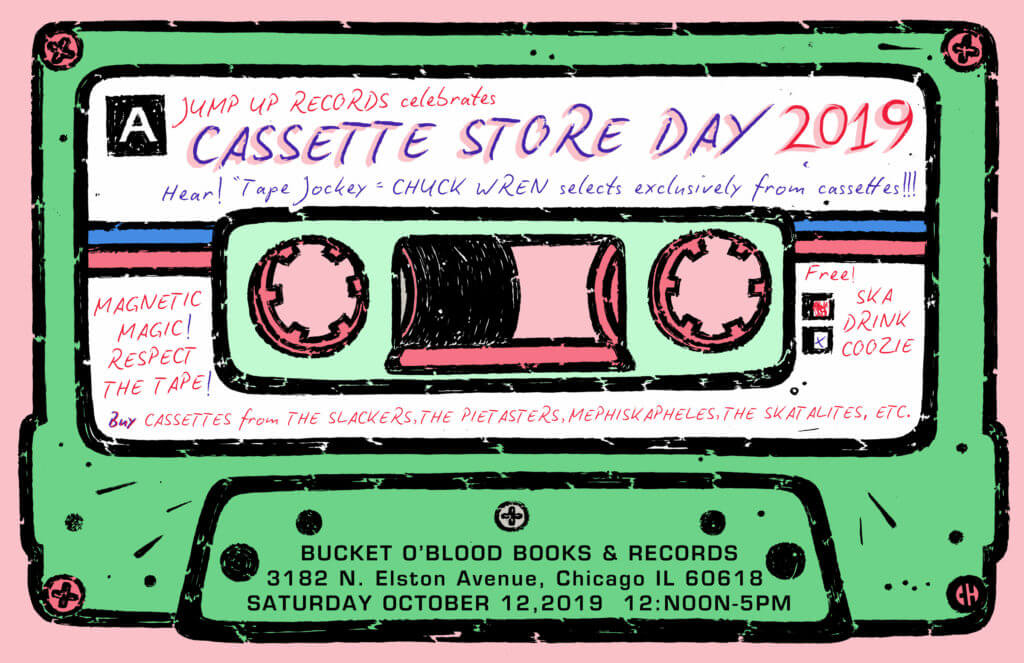