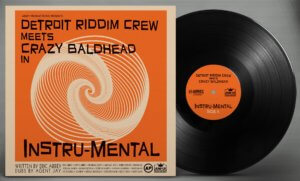 BRAND NEW 2022! Our partnership with ABBEY PRODUCTIONS continues with the second album from his all star ska/reggae band based in Detroit! Written by Eric Abbey and mixed at Castle Hooligan in Detroit, and dubbed in New York City, “INSTRU-MENTAL” features 5 instrumental cuts on the A side with the dub versions by Crazy Baldhead (aka AGENT JAY of THE SLACKERS) on the B side. Musicians playing on the record include members of Detroit mainstays THE TRAITORS, 1592, DIRTY NOTION alongside guests from across the country  including Michael Bitz (Mephiskapheles) – Bass,  Dave Hahn (Dub is a Weapon)– Guitar,  Brian Lockrem (Monkey)– Trumpet,  Eddie Ocampo (Full Watts Band, Uzimon, etc) – Drums, Nathan Ranking – Guitar, Bass, Vic Rosario (Pilfers) – Guitar,  and Jon Roy (Unsteady, Smoke & Mirrors Soundsystem) – Baritone Sax. First pressing is limited to 300 copies on classic black vinyl – don’t miss it!  We also have stock on their last split 7 inch single with THE SKAPONES (UK) on import RED vinyl and their 2019 “With Friends” Christmas LP – add one and get a deal!  Check out the great review of this album at DUFF GUIDE TO SKA! Note: Instru-mental will be part of the LP subscription club and shipping out soon 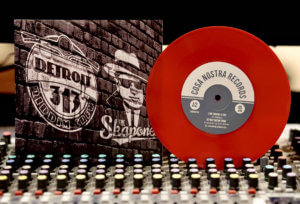