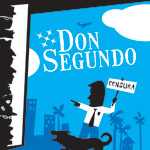 Hailing from the sun-drenched island of Puerto Rico, Don Segundo brings the vintage sounds of ska, rocksteady and reggae to music lovers searching for something beyond the dullness of mainstream pop and watered down pseudo-ska. From its Caribbean standpoint, Don Segundo aims to create a musical bridge between Jamaica and the multi-cultural, cosmopolitan milieu of its native San Juan.

By the time the group started playing under the name Don Segundo in May of 2006, it already had a loyal fan-base expecting to see a revival of the band’s previous project, The Freedom Sounds, as five of its original musicians were eager to remain playing actively. Formed in 1998, The Freedom Sounds had slowly become one of Puerto Rico’s leading traditional ska bands. The group stayed together for over five years, releasing an album in 2001 (“Reconocer”), touring Mexico in 2004, and sharing acts with well-known bands such as The Stubborn All-Stars and The Skatalites.

Following the breakup of The Freedom Sounds, its remaining members enlisted the help of two veteran players from Puerto Rico’s reggae and punk-rock scenes to continue what they had started: Gabriel Beauchamp on the flügelhorn and Raúl Navarro on bass. The result was a highly danceable, more mature sound that found support from an older and more sophisticated audience. Hence, this new group was aptly named Don Segundo.

Don Segundo brought together a collaborative effort to the songwriting process, with all its members contributing with music and lyrics to some extent. This is how their songs get to range from thoughtful instrumentals to modern takes on interpersonal relationships, consumerist culture, and the unexpected twists of everyday life.

After a year of playing gigs in their native island and honing their repertoire, Don Segundo started to work on a full-length record in hopes to take their music abroad. This album – “Censura” features the band’s careful blend of high-energy horn riffs with the jazzy stylings and soulful lyrics of sixties-era ska and rocksteady.