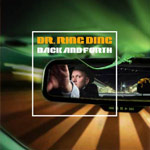 DR RING DING’s began his professional career in 1987 playing trombone with EL BOSSO & DIE PING PONGS, one of Germany’s most famous ska bands. His experience in EL BOSSO lead to his life long love for Jamaican music. By early 1993 he had formed his very own band, DR RING DING & THE SENIOR ALL STARS, and over the next ten years they would release five albums, numerous singles, and two albums backing legendary Jamaican vocalists DOREEN SHAFER and LORD TANANMO. American releases on MOON SKA and JUMP UP helped solidify his fan base in the United States, and soon DR RING DING was enjoying a worldwide audience for his snappy vocal style and tremendous

musicianship. DR RING DING is not only a popular live performer, he is a studio musician, arranger, and producer in many different music genres such as Swing, Rhythm & Blues, Hip Hop, Rumba, and Punk, but, above all, in Reggae, Dancehall and Ska. DR RING DING has also made spectacular contributions to dancehall single selections for international producers- “DOCTOR’S DARLING” (Germaica Records) went top 20 of the German Black Music Charts at the end of 2002, VOM VATER (Germaica Records) appeared on numerous Reggae compilations, and he has shared dancehall singles with SIZZLA, CAPLETON, and TANYA STEPHENS. DR RING DING is always creating new music, which is why this new album BACK AND FORTH was so important. Not only does it look back at some of the finer moments in his career, but it also exposes us to many new songs from his forthcoming projects ….plus unearthing rarities and vinyl only singles in one nice package. This is not a “best of” per se – this is a “personal selection” hand picked by DR RING DING himself. The most die-hard DR RING DING fan needs to own this not only for the rare and unreleased tracks, but for the true pleasure of the album’s sequence and diversity. Reggae, Ska, Dancehall, Calypso, and even some hip hop appear on BACK AND FORTH. KING DJANGO and The SLACKERS Vic Ruggiero guest.

For Fans OF: The Skatalites, The Slackers, The Aggroltes, Trojan Records, Hepcat, King Django, Toots & The Maytals, Sizzla