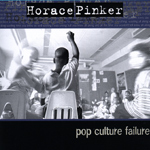 Simply put, Horace Pinker is one of the most underated pop punk bands of the past decade. Formed in Southern California in 1991, Horace Pinker harvested their sound from the rich skate-punk scene that spawned NOFX, Face To Face, Pennywise, Green Day, Agent Orange and countless others. Ten line-up changes, a move to Arizona then Chicago didn’t stop Horace Pinker from recording; they currently appear on 22 top punk compilations, eleven 7″ singles (inc a split w/FACE TO FACE an EP on

FAT WRECK), the top selling Cinema Beer Nuts Video/CD (Hopeless), and two full length albums…..for a combined total of over 100,000 units. This past year, Chris Bauermesiter from JAWBREAKER joined the band on bass, creating a flood of new interest in the band, including recent features in Maximum Rock & Roll and Punk Planet. Horace Pinker has played in over 17 counties in Eurpoe, incluiding an appearance at the Dynamo Festival in Holland and co-headlining the Innock Festival in Austria with The Melvins. They have toured endlessly in the states with the likes of Agent Orange and Jawbreaker with over 400 shows to date. What more do you need to know? Look to see Horace Pinker hit the road hard in 2000 for the release of “Pop Culture Failure”, their long awaited new full length.