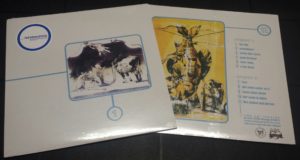 It seems strange, but we are seeing a bit of a renaissance on this album! At the time it was generally overlooked (some flat out hated it!) – but the fact of the matter is that HOT STOVE JIMMY’s “Theme From A Major Hit” was a bit ahead of it’s time. Fast forward t0 2017, RIOT FEST does a post on the “Ska’s Strangest Strands” and mentions it alongside the BLUE MEANIES in a truly favorable light calling it AVANT-SKA: “Likeminded Chicago bands The Blue Meanies and Hot Stove Jimmy would embrace the ska tag and push it to its psychedelic, drugged-out limits, with their respective final albums, 2000’s The Post Wave and 1999’s Theme For A Major Hit, respectively, being the most prime examples. By then, ska-punk was de rigueur, and though both acts fell into that tag at one time or another, their final albums sounded like acid-drenched freakouts that just so happened to ska elements peppered in. Surely confounding at their time, The Post Wave and Theme For A Major Hit remain documents of a time when ska became its most untethered and experimental, something that would take years to be fully embraced.”

Hot Stove Jimmy busted out on the Chicago ska/punk scene in 1996 with their HUGE sound, a sonic avalanche of noise, ska, circus music, hardcore, metal and punk all mixed into….by a 10 person band! Yet, amidst all this aggressive noise and energy, Hot Stove Jimmy finds a way to write catchy songs full of vocal harmonies and melodic breakdowns. CMJ Magazine described them as “ten young, talented musicians…..their enthusiasm steals the show!”, which was well documented in Chicago playing to near sell our crowds at Metro and Fireside. Hot Stove Jimmy were on too many compilations to mention, but when they returned in full-force they unleashed a final album that included tracks recorded with legendary engineer Steve Albini (Bush, Nirvana, Page/Plant).  “Theme To A Major Hit” saw the band take a more “insane” approach to the ska-core formula, in fact some wouldn’t call it ska-core at all. With a nod to the Blue Meanies and Mr Bungle, Hot Stove Jimmy’s album is full of spastic starts & stops, lots of screaming, ear-crushing feedback, aggressive vocals and evil keyboard lines. It is simply one of the loudest albums to have emerged from the ska movement!