Back in print after nearly a year to coincide with their European tour! Now on royal blue vinyl and comes with a patch!  Although JUMP UP is known for our Jamaican sounds, we are very proud  of America’s finest Northern Soul band – THE INCITERS from San Francisco!  An overpowering 11-piece dance floor soul band that has brought the house down from LA to Chicago and all across Europe, releasing 3 albums to date on Grover/Elmo Records in Germany and “ DOING FINE” which was recorded in Chicago and released by JUMP UP in 2000.

THE INCITERS play Northern Soul music, a genre that originated in the north of England in the 1960s, taking inspiration from America’s Motown greats like the Temptations, Stevie Wonder and the Supremes. Coined by the British press to describe the club scene in the North, where DJs played rare soul records from obscure independent labels all night long at venues like the Wigan Casino, Golden Torch, and Blackpool Mecca.

Northern Soul takes the Motown/Stax ethic but adds a stronger back-beat with more adventurous production, and THE INCITERS continue this tradition in grand style on their new 11 track album SOUL CLAP.  With 11 members wielding drums, bass, guitars, a full horn section, and three strong female vocalists, THE INCITERS  have no problem filling a room with the powerful sound of soul. The three vocalists — Emily Pegoda, Betsy Kniffin and Dani Wood — each take turns singing lead while the other two sing backup. Their choreography has an improvisational character to it as each of the singers cues off the moves of the others.  THE INCITERS first formed back in 1995 and had a successful 10-year run before breaking up in 2005 – leaving behind a massive following in Europe that demanded their return year after year. In 2011, they got their wish as original member / bandleader Rick Kendrick went to work putting the band back together. The Inciters re-formed with some new, younger faces and picked up right where they left off.  Right after the group reformed in the spring of 2011, they embarked on another successful European tour, released a teaser 7” single on Scorcha in Germany, and then got to work to record their comeback album for 2012 – SOUL CLAP! 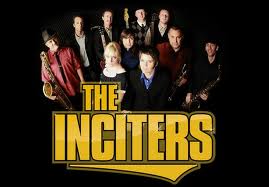