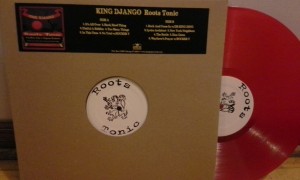 In case you need a refresher on the man, the legend, KING DJANGO…

A seminal force in the East Coast ska scene, KING DJANGO has made his name as a songwriter, singer, multi-instrumentalist, producer, and label owner (Stubborn Records). His versatility within genres of punk, rhythm & blues, and Jamaican grooves is unmatched, starting early as the singer / trombonist of legendary NYC ska band The Boilers (1986-1988), evolving through reggae/soul/punk/jazz experimentalists Skinnerbox (1989-1998), and achieving mainstream recognition with traditional ska supergroup Stubborn All-Stars (1994-1998). After the ska revival died down, King Django was able to

CD is out of print buy maybe you can find copies on Amazon:  Buy Jump Up CDs on Amazon