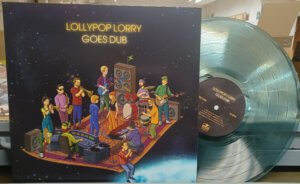 LOLLYPOP LORRY is a beloved ska & reggae act from Russia, between August 2018 and October 2019 the band returned to Octopus Studios to record this new album “Goes Dub”! As its name suggests,  this is a pure Dub album, influenced by traditional Jazz. A resolutely musical inspired opus with beautiful solos, guitars, brass, percussion… Jamaican sounds played live, with a superb mix produced by Victor Rice in his studio in São Paulo, Brazil.  “Goes Dub” features nine re-interpretations of standards played by legends such as Miles Davis, Dizzy Gillespie, John Coltrane, Paul Desmond, Aswad, Henry Mancini , Thelonious Monk, Dexter Gordon and Kenny Garrett! In 2020 there was a Russian pressed edition limited to 100 copies (which we distributed in private sales!)  –  we loved this album so much that we offered to press more in the USA to distribute worldwide! Now available on clear green vinyl in addition to black vinyl. Total press 500 copies.