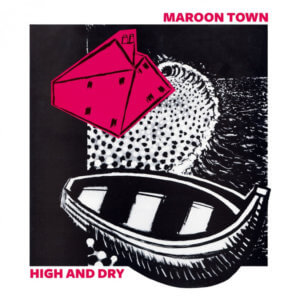 We are CRAZY psyched to stock one of our all time faves from the late 80s  UK ska explosion – MAROON TOWN’s debut album “HIGH & DRY” from 1990, produced by John Bradbury of THE SPECIALS for Staccato Records. In late 1980s England, Ska wasn’t quite in fashion as it had been earlier in the decade, the advent of rap, hip-hop, and underground/indie dance music ruled the airwaves and charts. This did not stop the multiracial, multi-culti band MAROON TOWN, named after clandestine villages set up by anti-British rebels in occupied Jamaica. Rooted in the hybrid formula of Two-Tone, “High and Dry” was an immediate success with it’s thrilling and diverse collection of fresh sounds blending  rap, funky groove, and acid jazz – as well as just being downright fun! With two energetic singers, STEVIE  B  (who many call a vocal/stylistic dead ringer for Michael Franti) – and female counterpoint Carolyn McCookweir, it’s extremely difficult to not be caught up in their one-two punch! The horn section is pure fire and the foundation ska rhythm is so tight it’s hypnotic! Songs like “Fire” and “Nostalgia” are unforgettable, while the political edge is never shied away from, either: “Pound to the Dollar” and “Thatcher’s Children” are takes on the politics of the day, while McCookweir’s empowerment anthem “Women Say No” is a song that is as equally relevant today as it was 32 years ago. “High and Dry ” is a must have, exciting debut record, and MAROON TOWN continue to this day, and are a popular concert draw all across Europe. DO NOT MISS OUT ON THIS REISSUE from MAD BUTCHER Germany!  Want to wax late 80s ska nostalgia? Pick up in stock import re issues from The Hotknives, Mr Review, The Burial, and The Trojans!