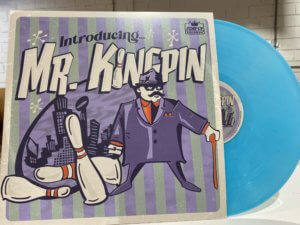 “Introducing… Mr. Kingpin”, the debut full-length album finally drops on vinyl on Jump Up! This 11-track LP includes scorching Jamaican ska tunes, soulful rocksteady ballads, and hard-hitting boss reggae riddims meant to be heard in the dancehalls.  Jon E Bravo, aka Mr. Kingpin, has been writing, recording, and performing ska music for 16 years with Dallas based 2Tone band Rude King , as well as collaborating with different artists around the world. RUDE KING was recently featured on the Specialized UK tribute album Check One-2 doing a killer version of MADNESS’ “My Girl” – exposing the BRAVO sound worldwide! ‘Mr. Kingpin’ is his new collaboration with in-demand keyboardist / producer Esteban Flores (Matamoska, The Bandulus, We Are The Union, Steady 45s, The Interrupters, Catbite) to release authentically inspired Jamaican sounds of the 60’s.  “Introducing… Mr. Kingpin” was recorded in California, Texas, and New York during the surreal year 2020 with a group of musicians who span decades writing and recording vintage inspired ska and reggae music. Two debut singles released in 2019 produced by Esteban Flores and mixed by Jayson Nugent (The Slackers). A true feel good Jamaican album from start to finish! Limited edition of 400 with 200 on classic black and 200 blue.