NOTE:  ONLY BLACK VINYL CURRENTLY AVAILABLE. Italy’s The Uppertones is a powerful trio of trombone, vocals, piano, & drums who play pre-ska Jamaican rhythm & blues – fronted by Mr.T-Bone on lead vocals. Their style is rooted in 1950’s Jamaica when rural mento & calypso / folk music began to mix with boogie, swing , boogaloo, and American rock n’ roll – the seeds of ska. This trio aims to please crowds with a stompin’ swing mixed with the Jamaican edge and style. Mr.T-Bone is a well known singer, composer, and trombone player in the international ska scene who has released 10 solo albums in the last 15 years and has toured Europe, USA, Canada, Indonesia, Japan, Brazil and Mexico. Drummer Ferdinando Count Ferdi Masi is an Italian ska pioneer who founded Casino Royale and The Bluebeaters. Pianist Phil Cuomo is a very talented young musician, pianist and singer from Genoa, his hands run like a Louisiana train on the keys. The Uppertones first album “Closer To The Bone” was released in December 2015 to worldwide acclaim, then in 2017 returned with “Up Up UP!” featuring guest vocalist Jesse Wagner from The Aggrolites. In 2019 Jump Up dropped a Christmas 7 inch covering Luis Prima’s “Shake Hands With Santa Claus” setting the stage for their new album “Easy Snappin” – 10 toe-tappers including re-works of “Mojo Workin”, “L.O.V.E.”, “That’s Amore”, “Down In Mexico” and the title track. It’s a must for fans of original ska like The Skatalites, Byron Lee & The Dragonaires, Blues Buesters as well as jump blues crooners Louis Prima, Frank Sinatra and Louis Jordan. The Uppertones forte is without a doubt their live set – the trio has been touring non-stop playing close to 100 shows a year in 12 different European countries – hopping from club to club in addition to the summr festival circuit. Catch The Uppertones if you can! 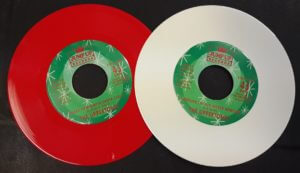 ADD ONE TO YOUR ORDER FOR ONLY $5  – Our yearly tradition of delivering a new Christmas record continues in 2019! In the past we have brought holiday cheer through 45 rpm records with the Pepper Pots, Brooklyn Attractors, Roger Rivas, Leo & The Line Up, Napoleon Solo, and Dr Ring Ding! This year we turn to our longtime dear friend MR T BONE and his latest project THE UPPTERTONES – a three piece that plays the music of Jamaica that pre-dated ska – a West Indies inspired version of Rhythm & Blues with a touch of mento and Latin styles.  This new holiday single puts a Jamaican rhythm & blues spin on Louis Prima’s classic “Shake Hands With Santa Claus” – the flip “Rudolf The Red Noised Reindeer” in mento style!! Limited to 350 copies on red and white vinyl!