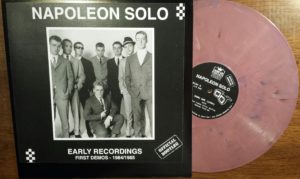 Napoleon Solo formed in the summer of 1984 by eight youngsters living in Copenhagen, their unique blend of sixties-influenced soul, R&B, Jamaican ska and British Two-Tone proved to be a massive success from the get-go. The band’s first big break came when they visited Hamburg in 1985 supporting Stiff Records’ mod-pop band Making Time – this concert was to be the first of many performances in Germany. In 1988 Napoleon Solo went to England to record the first mini-LP ”How To Steal The World”, it was produced by Buster Bloodwessel of Bad Manners and released on Unicorn Records. In support of the album, the band joined the Blue Beat Explosion Tour with Bad Manners, plaing concerts all across the UK. Napoleon Solo appeared on the live-album ”Live in London” with the song ”Drive me Wild”, and NME magazine called them one of the 10 best ska-bands in the world. In 1989 Napoleon Solo released their full-length album ”Shot!”, which was published by Pork Pie in Germany and by Bluebeat Records in the UK. Once again the band toured both Germany and England. The band broke up initially in 1992 but reunited from 1996 through 1999 with varied lineups. In March 2009 Napoleon Solo was reunited with the original lineup for the first time in 10 years! In 2015 they released the brand new holiday single “Merry Christmas Everybody”, which was released as a split vinyl 7″ single in 2016 with fellow countrymen Leo & The Lineup. The success of that single helped stirr the pot of creativity, and we are proud to announce that a brand new album will be released in 2018! In the meantime, we have dug into the archives and have resurrected 6 songs that pre-date “How To Steal The World” – originally only released on limited edition cassette tapes. “Early Recordings” features the song “Nobody Told Me”, a classic that fans have been requesting for 30+ years and has lived on through a YouTube video. This “Official Bootleg” vinyl collection is very limited on marble colored vinyl.