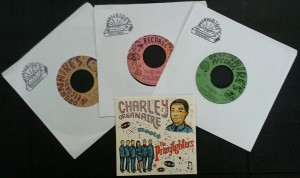 Have you been keeping up with our Jamaican Oldies shows in Chicago? If so you know that  Jamaican foundation ska legend CHARLEY ORGANAIRE is a regular fixture on the Chicago scene!  THE  harmonica sound on thousands of early ska sessions at Studio One, Treasure Isle, etc – he was also an accomplished singer / band leader / arranger / label owner who released singles in the 60s on his own ORGANAIRES imprint. The success of his Chicago appearances, dare  we call it a  “return to the scene”,  has lead to a tremendous relationship with Minneapolis’  THE PRIZEFIGHTERS resulting in six tracks being recorded together in the Spring of 2014.

This first single sees two of CHARLEY’s vocal classics from the 60s get a new lease on life –  “TROUBLES” and “ELUSIVE BABY” (a duet with Whitney) never sounded finer, two scorching ska tunes recorded with vintage equipment and old timey sass.  It’s top notch all the way from start to finish. 1964 all over again. Single #2 also digs deep for another classic from back in the 60s, “SWEET JAMAICA” is a beautiful light hearted tune that you can vision being big on Jamaica’s North Coast Hotel Scene with the flip being a brand new Charlie penning song “ISLAND GIRL” sung by WHITNEY of THE PRIZEFIGHTERS! Single #3 has just arrived with the final pieces in the ORGANIRE puzzle, the wonderful vocal ska of “MY WORLD” and the scorching harmonica instrumental ska shuffle of “I WON THE PRIZE”.  CHARLEY and THE PRIZEFIGHTERS are off to Europe and we’ve got a “Tour Only” CD also available with all 6 racks PLUS the 6 tracks from THE PRIZEFIGHTERS “A KNOCKOUT IN 3 ROUNDS” 7″ inch series. FYI:  We’ve written a bio on the legend of CHARLEY ORGANAIRE below – do yourself a favor and read it! A true unsung hero of Jamaican ska!

7 inch vinyl and CD are now all OUT OF PRINT

KNOW YOUR JAMAICAN music history! The legend of Charley Organaire…..

Charles Cameron was born in Kingston, Jamaica on March 20, 1942. He was inspired by the singing of his mother Louise, and his neighbor Mr. Randolph, a mean harmonica player. From the early age of 5, Charles started performing in neighborhood concerts, churches, and lodge halls – reciting poems, singing and playing his plastic harmonica. At the age of 9, a talent scout named Vere Johns had Charles performing on the “Opportunity Knocks” radio program and at various theatres in Kingston, such as the Palace, Ambassador, Gaity, and Majestic. He performed with all the big singers like Jimmy Tucker, Winston Samuels, and Laurel Aitken, plus was a side-kick to Bim and Bam, Jamaica’s leading comedians at the time. In his teens, Charley “Organaire” Cameron performed with big bands lead by Carlos Malcolm and Sonny Bradshaw. Then Charles teamed up with Bobby Aitken and formed a band called the Carribeats, recording the hit track “Never Never” with Bobby on vocals, Charley on harmonica. Charley “Organaire” was now unstoppable, becoming a well known studio musician performing on sessions with Bob Marley, Jimmy Cliff, The Tenors, Derrick Morgan, Millie Small, Toots and the Maytals, Phyllis Dillon, Stranger Cole, and Lord Creator. The “Organaire” worked for the biggest labels in Jamaica: Prince Buster, Studio 1, Beverly’s, Duke Reed, Treasure Island, Highlights and King Edwards. Charley also started producing hits for his Organaire label, most notibly “Little Village/Little Holiday”, “London Town”, Illusive Baby”, “Sweet Jamaica”, “Your Sweet Love”, and “Let me Go”. Being one of the most popular entertainers in Jamaica, he moved to the north coast and worked in the tourist industry. Playboy, Hilton, Holiday Inn, Intercontinental, Yellow Bird, you name it, he played there. Charles moved to Chicago in the late 70’s, eventually forming his own band called “The Charles Cameron & Sunshine Festival”. The “Organaire” band played in various night clubs, for major corporations, and political functions throughout Chicago including events for former Mayors Harold Washington and Jane Burn. Charles also played at Chicago Fest, Festival of Life, Taste of Chicago, and the African Fest. Charley “Organaire” Cameron continues to write and record to this day, the title track from his “Never Stop Loving You” CD appeared in the movie “Love Jones” starring Nia Long and Lorenzo Tate, and his newly released “Friends” CD features collaborations with Charlie Hunt and Steve Bradley. In 2012/2013 Charlie Organaire became a regular fixture at Chicago’s Jamaican Oldies productions at Mayne Stage, performing with Stranger Cole, Roy Panton & Yvonne Harrison, Eric Monty Morris, Derrick Morgan, Derrick Harriott and Dennis Alcapone. 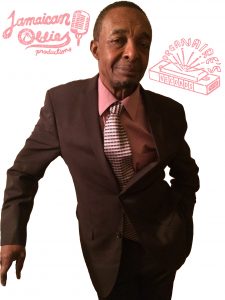