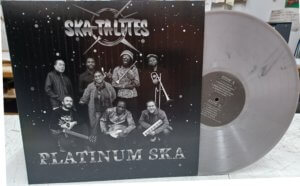 repressed on vinyl with three bonus dubs. The group has been at the forefront of ska music since the mid-’60s, and this studio album is their first recordings to follow the band’s 50th anniversary celebrations in 2014. The Skatalites built the foundation for Jamaican music, and was part of it’s evolution as it morphed from ska to rock steady then reggae, helping give birth to household names like Toots and The Maytals, Lee Perry, and of course Bob Marley & The Wailers. Since re-forming in the ’80s, The Skatalites have been through their share of transformation and have sadly seen most of the band’s original members pass on. Each of today’s existing members were hand-picked by the band’s original members to play, and they continue to hold down the tradition by performing at some of the most prestigious festivals around the world. Two of the tracks included on “Platinum Ska” feature original 60’s era drummer Lloyd Knibb (who passed away in 2011), plus it captures alto sax player Lester Sterling and vocalist Doreen Shaffer, the last two living original Skatalites members. The album was mixed in Mali and also includes guest appearances by legendary Malian musicians Assaba Dramé and Madou Sidiki Diabaté. Simply put, “Platinum Ska” is a testament to some of the greatest Jamaican musicians the world has ever seen, and Jump Up is proud to preserve this legacy once again with a limited vinyl edition. Limited repress on metallic marble and classic black vinyl.