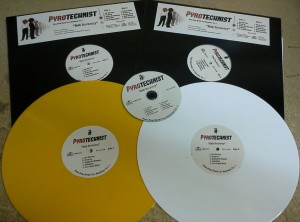 LOW STOCK WARNING! NICO LEONARD is back, once again at his famed PUM PUM HOTEL studios in Belgium cranking out the finest Jamaican sounds on the European continent, if not the world! Oh where do we begin? Well over 10 years ago we were introduced to the MOON INVADERS, a sweet New Orleans rhythm & blues fueled ska band that went on to make four incredible studio albums before calling it a day. In between those great albums they started the CAROLOREGIANS with several members of MOON INVADERS, focussing more on funky reggae and Jamaican “skinhead” sounds – we loved both bands so much JUMP UP sponsored a USA tour for them and released a limited TOUR ONLY vinyl LP, a split band CD, and selections from the PUM PUM HOTEL VOL 1 CD collection released on Grover Records. NICO has returned with a fantastic new dub / roots project enlisting a couple playersPierre Haegeli on bass and guitar and David Loos on tenor sax – and of course Nico does all the drums, percussion, keyboards and melodica. It’s so much more than you’re average sleepy effects-heavy dub record – we’d like to say this record will win over reggae fans that don’t necessarily get into “dub”.  It’s a warm, 100% organic, reggae album with a superbly retro feel – ten lush instrumentals that will put you in the mood for summer.  Since the project started Nico has also joined a reggae “supergroup” trio which has brought him legions of new fans – the REGGAE WORKERS OF THE WORLD with Jesse Wager of THE AGGROLITES and VIC RUGGIERO of THE SLACKERS. LPs is limited to 350 copies and comes in white or yellow vinyl.  All formats OUT OF PRINT