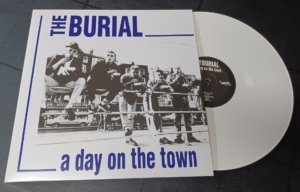 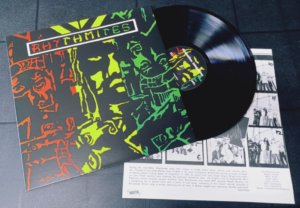 Two stone cold late 80’s UK classics reissued by Radiation Records Italy! Hailing from Britain’s formerly industrial heartland of North Yorkshire, The Burial was a forward-facing ska, punk / Oi! band with a strong Left orientation, channeling 2Tone, Northern Soul, punk, and folk influences. Rhythm guitarist Eric ‘Barney’ Barnes made sure the world knew these skinheads were antifascist and the use of a full horn section made their sole LP, A Day On The Town, stand out. Unlike The Redskins, who soon moved to the student circuit, The Burial remained embedded in the working class communities from whence they came; this fine, often overlooked LP will be devoured by all fans of ska-punk and Oi!. We played the laid back skanker “The Gift” and punk-calypso corker “Shelia” a ton on our radio show back in the day, other songs harkened back to early Billy Bragg, The Jam, and the debut Dexy’s album.  500 copies on white vinyl.

During the mid-1980s, Rhythmites used their music to break down racial, ethnic, and cultural barriers. Formed in the small Roman town of Bath in the west of England, Rhythmites issued a couple of tapes on UK peace punk pioneers Subhumans’ label Bluurg before cutting debut LP Integration in 1989, by which time lead singer Angus Wright and bassist Clive ‘Flash’ Gordon were injecting the Jamaican sensibility atop the English core of keyboardist Rich Patterson, future Invisible System drummer Gary Woodhouse and future RDF guitarist Murph Murphy. It’s a compelling set of defiant roots with a touch of new wave, reminding of the vibrant hybrids conjured in the greater Bristol area, a worthy discovery for all fans of British reggae and rebellious late-80s post-punk.