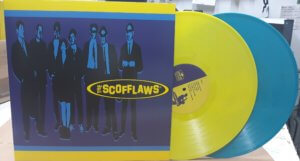 REPRESS HAS ARRIVED! The Scofflaws are a New York-based ska band that debuted in 1988. Known for their rambunctious live shows, technically proficient horn solos and tight arrangements, the Scofflaws were one of the top third wave ska acts of the ’90s and one of the most beloved bands on the now-defunct Moon Ska label, as well as the center and focal point of the once-thriving Long Island ska scene. The Scofflaws early sound was characterized by strong R&B and jazz influences as well as eclectic covers of such songs as Henry Mancini’s “A Shot in the Dark” and Danny Elfman’s theme for Pee-wee’s Big Adventure, while original songs like “Rudy’s Back”, “Paul Getty” and “William Shatner” became cult favorites due to the offbeat lyrics and quirky vocal stylings of bandleader Richard “Sammy” Brooks, co-founder Mike Drance and trombonist Buford O’Sullivan. Their self-titled debut studio album was released in 1991 by Moon Records, followed by Ska in Hi Fi in 1995, the concert recording Live! Vol. 1 in 1996, and their third studio album, Record of Convictions, in 1998. They toured the United States several times, including stints as the openers for Desmond Dekker and Bad Manners. The band’s lineup saw frequent changes and served as a springboard for numerous New York ska musicians, original co-frontman Mike Drance left in 1994 to form the Bluebeats, bassist Victor Rice went on to be a founding member of the New York Ska-Jazz Ensemble and continue a career in music production, and Buford O’Sullivan played for The Toasters and Easy Star All Stars. Although the Scofflaws have not released a studio recording since 1998, Brooks continues to lead the band in live performances within the New York area.  We are so excited to release their 1991 debut album on vinyl for he first time ever, on royal blue and yellow.