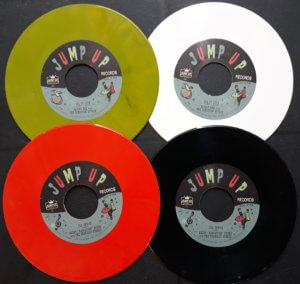 We’ve got a real great JUMP UP 45 for all you dancers out there! It’s been in the works for a couple years now! When we put RODDY RADIATION’s version of FRANKIE FORD’s 1959 boogie piano rhythm & blues jam “Sea Cruise” on a free CD sampler years ago, fans begged for this to be released on a 45. A true classic that had a beat that anticipated ska, it’s been covered many times over the decades but most famously in our Jamaican world by Jackie Edwards in 1964, and Rico Rodriguez (with The Specials) on 2-TONE. But all these years later we never could decide on a fitting tune to compliment it ….until NOW!

Chicago’s roots queen BAILEY DEE has been thrilling audiences worldwide for years, and little did we know that she was a huge ska fan! Bailey started tossing in more focussed ska rhythms on songs during her live sets, fully witnessed during the last BRING IT UP HIGH festival where she played alongside a rare reunion by St Louis’ THE SKALARS. We were SO thrilled! When we told Bailey we had this RODDY tune and needed another she immediately suggested “SEA OF LOVE”, a rhythm & blues nugget from 1959 sung by PHIL PHILLIPS and THE TWILIGHTS. BAILEY enlisted members of DEAL’S GONE BAD (bassist SPYDER was already part of her band) and HI FI & THE ROADBURNERS and the rest is history! Of course making the package perfect is beautiful label art by the one and only CHEMA SKANDAL, who knocked it out of the park with this rockabilly roots homage! Available on classic black (no substitute for roots purists!), orange, green, and white vinyl. Email color choice to jumpuprecords@gmail.com – all colors are limited! 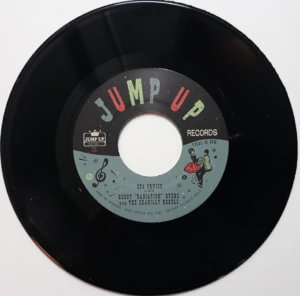