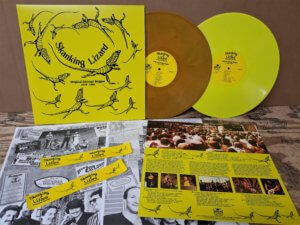 Skanking Lizard originated in Chicago in 1978 by a group of friends who had a deep love for reggae music, and by the 80’s this line up of northside musicians became Chicago’s original performing reggae band. Skanking Lizard was no island tribute band, they concentrated on developing their own sound which incorporated American roots rock with reggae rhythms. In the 1980’s, they became one of Chicago’s favorite festival bands and toured with the likes of Toots and the Maytals, Mighty Diamonds, Steel Pulse, Neville Brothers, and the B-52’s. They released the “Jesse James/Mushroom” 7 inch single in 1983, charting on Jamaica’s Top 40 List. In 1984 lead singer Alan “Blood” Lery released “Kingston Meets Chicago” 12” EP, which was recorded at Channel One Studios in Kingston and featured Jamaican legends Santa Davis on drums, Ranchie McLean on bass, Skully on percussion, Ansell Collins on organ, Howard Yukon of the Blue Riddim Band on guitar, and Shay Jones on backing vocals. The producer was Jimmy Becker of Blue Riddim band, a famed studio harmonica player who also was a member of Skanking Lizard in the early 1980’s. Both original vinyl releases appear on the band’s first ever anthology “Original Chicago Reggae”, out now in celebration of Record Store Day! Eleven tracks including never before released studio gems, including two ska tunes from 1988 recorded as a tribute to 2-Tone! Second Pressing on Yellow Vinyl out now!

Tracklist:
Side A: Jesse James / Mushroom / I Don’t Mind / It Happened / Heart Full of Soul / Video /
Side B: Strange Cargo / Wear A Smile / Tonight / Tears of A Clown / Too Much Pressure