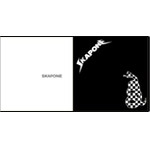 SKAPONE members have been performing ska on Chicago’s scene for over 20 years now – an amazing feat to say the least! Performing mostly original compositions, Skapone’s driving rhythm section is complimented by outstanding vocals and horns. The band appears at at many clubs and venues, as well as corporate and charity events throughout the Chicago area and mid-west. The band hit the studio hard in 2007 resulting in a August 2008 release to an outstanding crowd at the Abbey Pub!

The roots of SKAPONE lie in an incarnation called STATE OF EMERGENCY (1985-1992), who released a four song EP (self titled) in 1988 and an album titled Skaterbrain in 1991 – both vinyl only releases on Debussey Records. When State of Emergency dissolved, immediately out of the ashes came SKAPONE in 1992. During the early 90’s the band self released a CD and Cassette, which put them on the radar of Midwest ska label JUMP UP RECORDS, who immediately featured them on genre-defining AMERICAN SKATHIC CD compilations which brough them to the attentions of tens of thousands new fans worldwide! In 1998, JUMP UP Released their 2nds album BOLD NEW FLAVOR, which saw the band continue to develop their signature 2 TONE influenced sound and fun-loving song writing. Over the next decade – SKAPONE safely road out the coming and going of the THIRD WAVE with it’s slew of band-wagon jumping “not ska” bands ho flooded the market with a watered down sound. They kept performing as the line-up changed every few years, and by 2007 the core members of the group – Mark, Link. Chris. Mitch, Jason – felt the itch to deliver their fans a new album. Dubbed the BLACK AND WHITE ALBUM as a tribute to the checkerboard days of yesteryear – this new record
features a wonderful diversity that has not appeared on any SKAPONE recording to date: bouncy crowd rhythm and blues flavored tunes about strip clubs and food by the one and only Link Seabrooks, scorching spy-instrumentals and down tempo head nodding ska by Chris Dorff, and politically penned up beat 2 TONE with 80’s world beat flair written by Mark Callahan. A truly amazing feat – after 20 plus years a wonderfully creative new outing from a band who love the music as much now as they did when they were kids back in the 80’s!! Viva SKAPONE!