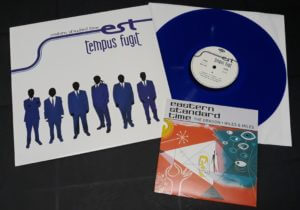 We’ve restocked some classics from Washington DC’s jazz ska pioneers! Back in 2010 we released “Tempus Fugit” in the USA on that ol’ compact disc format and imported German vinyl copies from Grover Records. We realize many of you were’s hooked on the wax then – that’s why we are bringing it back! We even have the limited edition blue vinyl repress! In between “Tempus Fugit” and  2019’s “Time For Change” the band released their own 7 inch single entitled “The Dragon”, which is available through us for the first time ever! Get both and get a deal! 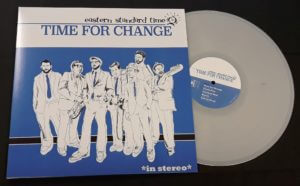 Washington DC’s messengers of Ska-Jazz are back with a new record, their first full-length release since the critically acclaimed “Tempus Fugit” and first release since appearing on Derrick Morgan’s live album in 2017. “Time For Change” embraces the band’s signature sound of bop jazz and Jamaican rhythms, and blends this with with soul, rocksteady, and reggae Whether in a smoky jazz club or on a festival stage they always deliver a dynamic live performance. That signature flexibility has led to them becoming backing musicians for many Jamaican greats, including Derrick Morgan, Roy Ellis, Dr. Ring Ding, King Django, and Mr. T-Bone. Formed in 1995, Eastern Standard Time began as a project to bring musicians from Washington DC’s jazz and Caribbean communities together to play music based on the original Jamaican Ska. Over the years the membership crystalized into a seven-piece group primarily blending American soul and jazz with danceable Jamaican rhythms from the 50s to the 70s. Eastern Standard Time has logged years on the road, with dozens of tours throughout Europe and North America to their credit. As 2019 dawns Eastern Standard Time will be touring throughout Europe, North America, and beyond in support of Time for Change.  Heavyweight black vinyl pressing for premium audio quality, limited edition “natural” white vinyl now available limited to 75 copies.