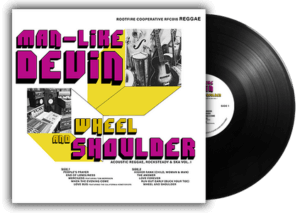 Devin Morrison aka Man-Like-Devin is a songwriter, guitarist and collector of Jamaican music born and raised in Los Angeles, CA. In 1999 he co-founded Los Angeles roots-reggae group The Expanders. They spent the next decade playing in and around the L.A. area as part of the city’s then-thriving ska, rocksteady and early reggae scene. During that time they also performed throughout California as the backing band for many of their Jamaican musical heroes including Alton Ellis, Leonard Dillon of The Ethiopians, The Wailing Souls, The Maytones, Pat Kelly, Roy Shirley, Stranger Cole, Prince Jazzbo, Willi Williams, The Cables, and Winston Jarrett. The Expanders released four studio albums from 2011-2018, the latter two of which debuted at number one on the Billboard Reggae Chart. In 2018 Morrison and The Expanders parted ways on friendly terms, he began writing a solo acoustic record and teamed up with long-time friend Roger Rivas (The Aggrolites, Long Beach Dub Allstars, Jason Mraz) to record it. Man-Like-Devin’s first acoustic solo record Wheel And Shoulder: Acoustic Reggae, Rocksteady & Ska Vol I was recorded at Rivas Studios and Man-Like Studios from October 2019 to October 2020 and was be released on the Rootfire Cooperative label. The full-length LP is a completely acoustic album with no electric instruments that features Morrison’s GRAMMY-nominated brother Patrick Morrison on upright bass, banjo and lead acoustic guitars, Devin’s father Tom Morrison on harmonica, and The California Honeydrops. Beautiful ska & reggae with a Jamaican mento lean, we released the cassette version and CD in late 2021, and we are now are proud to carry the vinyl in the webshop!