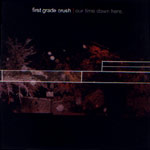 First Grade Crush was started under the name The Skallops in early 1995, and have since then turned into a significant Chicago-area ska-punk force by adding a full horn section and theramin, the experimental sound-manipulating device made famous by early electronica pioneers. These additions have created an exciting new musical style, powerful rock influenced by hyper ska, hardcore, emo, indie, & punk. Their extensive touring has included shows at Chicago’s House of Blues and Metro with END_OF_DOCUMENT_TOKEN_TO_BE_REPLACED