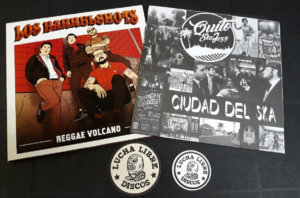 We are so excited to have these two amazing vinyl titles from LUCHA LIBRE RECORDS, who specialize in promoting bands from the Ecuadoran ska/reggae scene! Snatch these up as they are the very last copies that exist! LOS BARRELSHOTS released their debut mini CD “Reggae Explosion” in 2017, and now the first Ecuadorian Early Reggae / Rocksteady band from Quito kick it into high gear with their debut full length entitled “REGGAE VOLCANO”. Featuring 10 original tracks, mainly instrumental, once again staking their claim as one of the top Latin American groups of the skinhead reggae genre. Los Barrelshots have been able to recreate in the studio this infectious sound, firmly rooted in the Jamaican musical heritage blended with soul, funk, and jazz, which has made them an essential live act of the national scene. Featuring Lady Lex on one track. Limited to 300 hand-numbered copies. QUITO SKA JAZZ ‘s debut LP features 8 extended original instrumental jazz ska tracks, featuring Fred Reiter from New York Ska Jazz Ensemble on one song. This top Ecuadorian band formed in 2012 and quickly became active on the local scene, single handedly spreading the gospel of ska and Jamaican musical culture in Ecuador. “Ciudad of Ska” is truly the first Ska record from thee “middle of the world” to get the vinyl treatment! Including one dub version and a live track. Limited to 300 hand-numbered copies housed in an amazing fold out poster sleeve. BUY BOTH LPs and get a DEAL! Free DRINK COASTERS and STICKERS while supplies last!