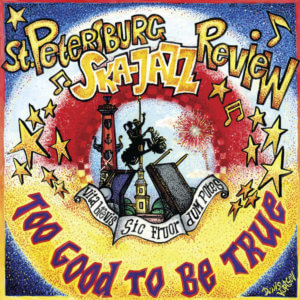 MAGNETIC LOFT has reissued the first two albums from Russia’s premier ska-jazz band on vinyl! A powerful 10 piece led by strong female vocals,  both albums bring back the days of the large swinging jazz orchestras and are fused with early Jamaican ska rhythms to die for! These cats were plying big band ska long before the current craze! The band also excels in unconventional covers, on their self titled album from 2002 they did the SEX PISTOL’s  “ANARCHY IN THE UK” and on their 2005 album “TOO GOOD TO BE TRUE” they did DEPECHE MODE’s “POLICY OF TRUTH”. Both albums were top sellers for us in the CD days and we are so happy to get these on Russian import vinyl, limited to 200 copies each!