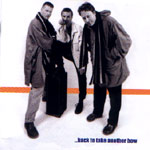 Check MegaSuperUltra out! This Chicago based power trio’s new release, “back to take another bow”, is a 9 -song follow up to their 1999 debut “Power Pop Art”. Heralded by Europe based Scootering Magazine “as good, and in some cases better than anything around during the ’79 Mod revival”. Revolver USA described their songs in this way ” …quick changes, starts, stops, clever lyrics and irresistible melodies”. MSU dodges the sophomore slump with this diverse collection ­ taking the END_OF_DOCUMENT_TOKEN_TO_BE_REPLACED

In the late 70’s, parka-clad thousands took to beaches of Brighton to defend the Mod way of life, depicted in the classic film Quadrophenia. Bands like The Jam, Purple Hearts, Secret Affair, The Lambrettas, and countless others re-ignited the R&B influenced, energetic pop sound that had been missing in punk, yet still containing the intensity and emotion of the UK punk movement. Here in the United States, rock critics tend to cite this “power-pop” movement in terms of it’s Chicago roots, END_OF_DOCUMENT_TOKEN_TO_BE_REPLACED