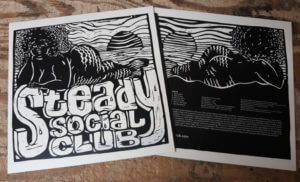 Not to be outdone are these two amazing releases from The Baertenders, currently they top traditional ska jazz act in Poland! We were able to get ahold of a limited supply of the band’s 2016 album “Poles Are Moving” pressed by the band themselves on 180g vinyl. We also have copies of their 2020 two track 7 inch single on Polish imprint Bad Look Records. Special deal on the LP plus 7 inch now!