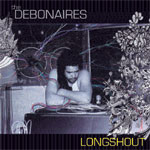 The Debonaires incorporate soul, jazz and funk while remaining ever faithful to the Jamaican sounds of ska, rocksteady and reggae music. Born out of Riverside, California in 1995, The Debonaires released their debut album “Groovin’ After Sundown” on Rivercidal Syndicate Records in 1998 and quickly gained a devout following throughout Southern California1s healthy traditional ska/reggae scene. Witness one show and you1re hooked for life – a mix of James Brown popcorn funk, a heavy dose of Roy Ayers style groove, Afro-Caribbean rhythms straight out of Mongo Santamaria1s textbook – topped off with sweet Jamaican roots reggae and ska that would have seen the TROJAN or PAMA imprint back in the day.

Built of a rough rhythm section, dynamic horn players, and a versatile vocalist, the Debonaires have shared the stage with reggae legends The Skatalites, Laurel Aitken, Justin Hinds, Desmond Dekker, and Phyllis Dillon as well as newer acts Hepcat, The Specials, The Toasters, Go Jimmy Go, The Aggrolites, and Fishbone. They were part of 2003’s monumental “Ska Summit” in Las Vegas that drew over 10,000 fans, and later that year The Debonaires released their self titled second album to much critical acclaim.

In the Fall of 2004 The Debonaires embarked on their first US tour that included high profile shows in Chicago, New York, Washington DC, and throughout the Eastern seaboard. The Debonaires hit the road again for 6 weeks in early 2005 to promote their new JUMP UP RECORDS album “LONG SHOUT”, playing dates nationwide with Go Jimmy Go and Deals Gone Bad, including a sold out Chicago performance with the legendary Desmond Dekker and the high profile “SKA WEEKEND” fest in Knoxville, TN that featured 30+ top bands from across the country.

“LONG SHOUT” is definitely the band1s masterpiece, with songs ranging from slap-you-in-the-face funky reggae vocal jams to scorching ska instrumentals and haunting organ driven skinhead reggae cuts – plus everything in between. Citing serious influence from Miles Davis, Charlie Parker, Herbie Hancock, Jackie Mittoo, Marvin Gaye, Ernest Ranglin, Steel Pulse, The Meters, Tommy McCook, Don Drummond and Winston Wright, the Debonaires sole goal in life is to produce music of quality and substance that is true to its influential origins.”LONG SHOUT” is the realization of this goal, plain and simple.

For Fans of: The Skatalites, Aggrolites, Hepcat, Deal1s Gone Bad, The Slacker