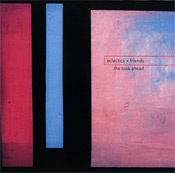 Hailing from Chicago, The Eclectics have been playing in the US for over five years, touring across the nation with such world famous acts as Less Than Jake, Bim Skala Bim, and The Specials. Their debut album “Idle Worship” was produced by Steve Albini and has sold close to 6000 units independantly, and was dubbed “the most important ska-punk album since Operation Ivy’s “Energy” and “a minor ska masterpiece” by Alternative Press. “Idle Worship” received great press in hundreds of fanzines, plus

constant airplay from over 300 college stations worldwide. After hiding out for a year, the band came back in full force and embarked on a 7 week European tour to close out the millenium. Upon their return, the band decided to make an entirely different album than “Idle Worship”, teaming up with top vocal frontmen from the punk scene to to create new sounds ranging from stylish Elvis Costello punk/wave, Who-inspired rock, ging-gangley guitar power pop and, of course, the peppy horn driven punk/ska the band made an artform. Dennis Buckley from 88 Fingers Louie, Frankie Delmane from Teenage Frames, Tim Kinsella from Cap’n Jazz/Joan of Arc, and Dustin Harris (Skapone/Boogie Shoes) contribute to this very “eclectic” offering! They’ve even thown in their new takes on classic Zombies and Beach Boys numbers! With this album, The Eclectics have proven that they are a band for the new millenium, keeping the US punk/ska scene interesting by stretching it’s very boundaries.