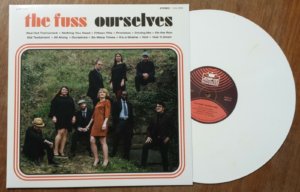 The Fuss is a dynamic ska, rock steady, and early reggae band from Washington, D.C. Their sound pays tribute to the music of 1960’s Jamaica and the British Mod scene, while putting modern slant on these timeless styles. The group is comprised of 3-part female harmonies, a 3-piece horn section, and 4-piece rhythm section. Since the band formed in 2014 and they’ve had the pleasure of sharing the stage with bands such as The Skatalites, The Toasters, The Pietasters, Eastern Standard Time, The Interrupters, Save Ferris, Steady 45’s, and many more. “Ourselves” is the band’s debut 14 track album, a brilliant follow up to their critically acclaimed “In Trouble” EP, standout track “So Many Times” recently appeared the Ska Brewing/Jump Up collection “Drink The Ska”. This past summer we leaked a limited run of vinyl to the band on their east coast tour, now we are proud to say that we can supply the world with this fantastic debut. It’s as great as it looks – no lie! White vinyl and retro cassettes are in stock!