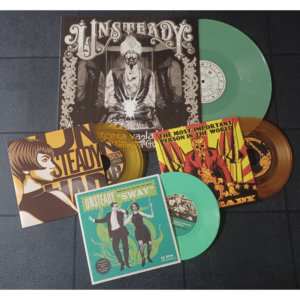 Formed in 1992, “San Diego’s mutated ska collective” Unsteady originally featured two members of local ska band the Donkey Show, guitarist Chris “Creedy” Bates and drummer Kent Graves, along with sax / vocalist John Roy, who’d been with a late-’80s local ska band called the Gangbusters. They were soon joined by keyboardist Kevin “Baby” Hewitt and bassist Paul Howland from the original local Wallflowers. Later, drummer Jimmy Boom replaced Graves, and new members were added like Clay Elliot (sax) and Jon Fisher (trumpet). Their 1996 debut album Tightrope (Immune Records) was followed by 1997’s Double or Nothing (Asian Man Records) and Live in the Studio (2001).  After a prolonged period of inactivity, they reunited to play several live shows in summer 2010, continuing to get together from time to time. In 2017 they went single crazy releasing “LIAR” b/w MR BURU” and “The Most Important Person” b/w “Self Made Man” plus a split with the Satanic Puppeteer Orchestra and their tune “SWAY”. Subsequent gig dates found vintage members John Roy and Kevin “Baby” Hewitt now reunited with bassist Paul Howland, although Howland was playing guitar this time around, along with a band that fluctuated from six to nine or more members. Fast forward to 2021 and John Roy is taking over the world with his studio project SMOKE & MIRRORS SOUND SYSTEM, yet he still finds time to release the brand new UNSTEADY album “THIRD TIME’S A CHARM”  that blends ska with bordertown radio, add a dash of geek, lounge, jump, circus, and street corner busking – that’s close to the Unsteady sound! Clear green vinyl, plus we have all the 7 inches mentioned in a bundle as well!